Question 1: How many persons sit to the right of the person, who has 9 books?

Question 4: What is the position of T with respect to O?

Question 5: Question 5: Which among the following statements are true?
I. Four persons sit between E and R.
II. Sum of books with the persons sitting at extreme ends is 31.
III. R has more books than Q.

e. Only II and III

Directions (6-10): Read the given information carefully and answer the given questions:
Nine events A, B, C, D, E, F, G, H and I are held in different months January, February, March, April, May, June, July, August and September in the same year. (All the events are assumed to be held on 1st of given months). No two events with names starting with consecutive letter are held one after the other. (i.e. If A is held in February, then neither B nor C is held in January or March). Themes of five of these events are Green, Blue, Yellow, Red and Orange.
C is held two months before the event, which has Blue theme. Two events are held between B and I, which is not held in May. The event, which has Green theme, is held three months after D. A is not held in March. B is held one month before the event, which has Yellow theme. G is held immediately after E. D doesn’t have any theme. H is held after F, whose theme is not Orange.

Question 6: Which event is held two months after A? 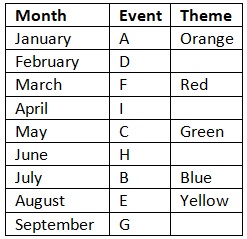 Question 7: How many events are held between D and H?

Question 8: Which among the following statements are true?

Question 9: Which event is held two months before H?

Question 10: What is the theme of the event, which is held in March?